Conversation with Roger Kupelian: Part One

As anyone who follows this blog will know, Roger Kupelian is an up-and-coming film director, graphic novelist and Hollywood VFX wizard who also happens to have done some superb artwork for Tymon’s Flight. Roger and I met in New Zealand during my VFX animation days. I caught up with Roger recently, curious about what he’d been doing on the creative front in the last few years. I knew it would be worth looking into.

The result was a conversation that dealt with our respective creative news, but also grappled with some other interesting and sometimes difficult subjects. Because life is strange, wonderful, difficult, perplexing, sweet and heartbreaking, and it’s sometimes good to take stock with a friend and shoot the breeze.

I’ve split the breeze-shooting into three parts, and will post one part a day for the next three days. I hope you enjoy it as much as I did… And thank you for being game, Roger!

MARY: Roger, how di body? It’s been a while since I saw you in town. What have you been up to since we last spoke?

ROGER: Koosheh. We deh Freetown pikin. Things have been bittersweet and prolific. How about you?

MARY: Mostly sweet. The third instalment of my ‘Chronicles of the Tree’ fantasy series came out in Australia and New Zealand in 2011. ‘Samiha’s Song’ won the Sir Julius Vogel Award for Best Novel in 2012, which was a very sweet/sad way to say goodbye to the Land of the Long White Cloud. We moved to London at the end of that year. Since then, I’ve been writing a novel set in my childhood home of Cyprus, which I’m currently in the process of adapting as a play. I attended a course with a wonderful playwright who works at the National Theatre, in February. 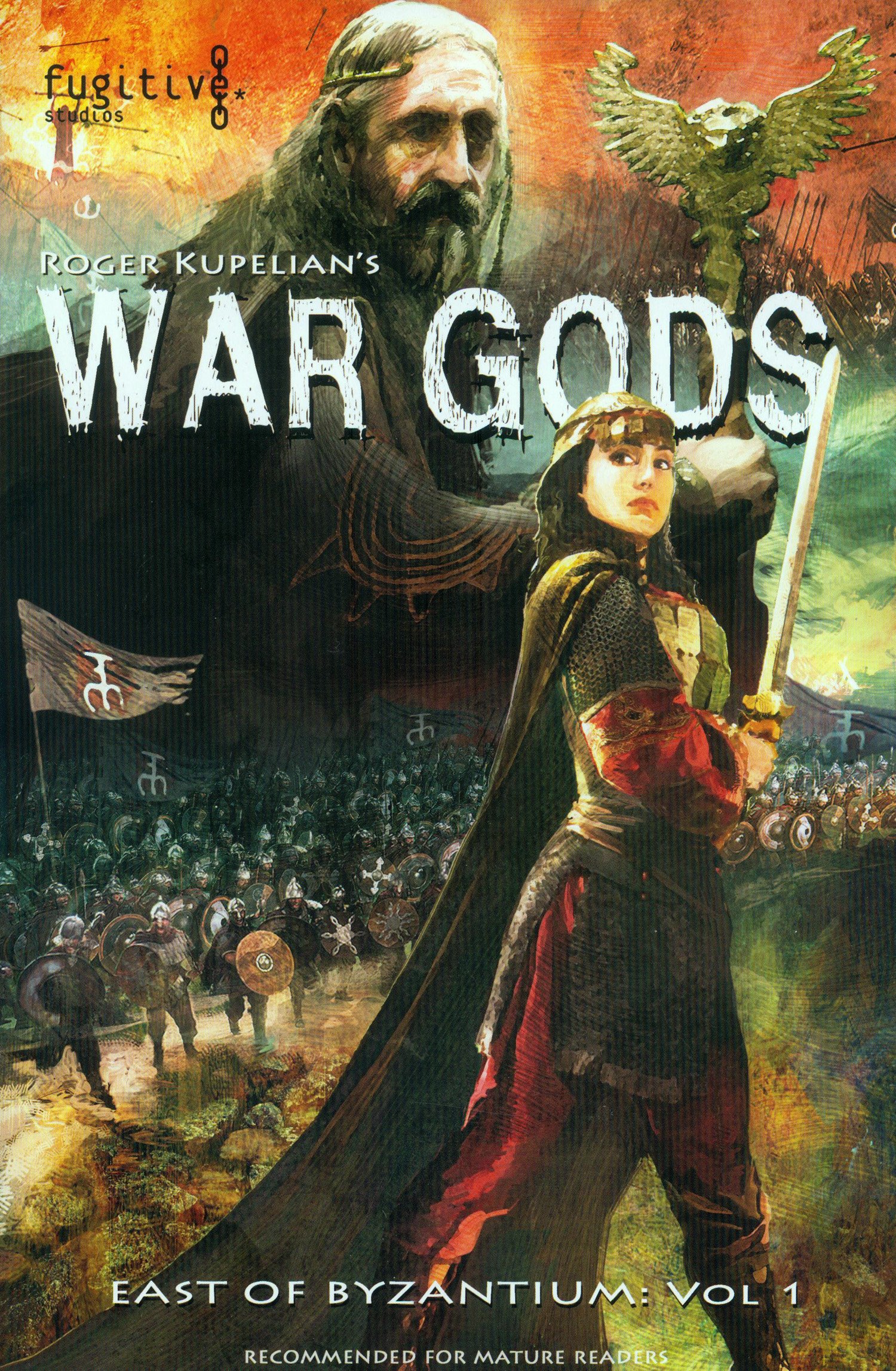 e workshop buzzing with ideas and unable to sleep, obsessed with this new form. I realized I was onto something I loved. I hope to “workshop” my play in September and take it further.

What about you? You’ve developed some incredible ideas of your own over the past few years – could you give me a potted history of your creative doings since 2011?

ROGER:  Having grown up as the son of a writer, I know full well how thankless writing could be. So, being a glutton for punishment, I decided to take the ideas that came out of my fledgling screenwriting efforts, and convert them to graphic novels, which I did with the East of Byzantium graphic novel series.

War Gods and Warrior Saints are a real labour of love. I don’t pretend to be a comic book artist by any means, but this was a way for me, as a film production artist, to lay out the screenplay in a sequential art form, and say “Here it is. Here is the vision!”

MARY: Both of us have come from a background in film production. We met working on Peter Jackson’s LOTR films, in New Zealand – I can’t believe that was fifteen years ago! It was a tough job and a great job in many ways.

But it’s a big step from doing shots to pulling together an entire creative project of one’s own. Many of us dream: only a few manage to do it. You’ve actually done it, developing East of Byzantium.

And now you’ve been at this fascinating, infuriating and addictive business – storytelling – for a few years. What do you think of it? Do you find you tell stories because you have some specific idea, or reality to communicate? Or do you do it because you have to – because the stories break out of you, alien-style?

ROGER:  Yes. EoB is at once the most wonderful and the most vexing thing I’ve ever done.

I think a lot of this comes from any anxiety that an artist is feeling and just tries to express through art, as we developed this language of expression early on to try and deal with life. This is a way of survival, and it adds meaning.

I found myself in your Cyprus novel. I could tell that whatever the topic was at that point, it was very natural to you, and it connected with me. During the Civil War in Lebanon, my relatives found refuge in Cyprus. Also, after World War 1, my grandfather was sent there where he joined the French-created Legion Armenienne. On my own trip there, our pilot made sure to point out the greener Turkey-occupied zone.

But beyond those facts, you built a world around a set of characters in the tragic reality of that island state, yet each in their own way endeavouring to overcome history.

I guess what I’m trying to say is, projects founded on a historical reality but told through creative invention (which is what the graphic novels for EoB really are), are my favourite kind of storytelling.

It also allows us to take a look at current events and weigh them against the past, but in a way that is not immediately confrontational, giving the reader or the viewer, some time to digest and really explore what the author is trying to say.

MARY: You’ve said some kind things there about my book… I really appreciate it.  History is a mine for creativity, isn’t it? Especially when it touches us in some personal way. There are stories that clamour to be told and that won’t leave us alone. (I guess that’s what I meant about the story clawing its way out.) They may be set centuries ago but they have contemporary echoes and relevance – otherwise we wouldn’t be so drawn to them.

Since we’re comparing notes about projects, I will tell you what I loved about the second volume of your graphic novel series (I’m looking forward to the third). Aside from the sumptuous visuals – something I would absolutely expect from you, given your talents – I was intrigued to discover a story I’m not usually given the chance to hear. Where else would I find a contemporary treatment of the life of a fifth century Armenian hero, which tells an exciting tale while not shying away from the historical complexities? I look at the cultural landscape around me, especially in visual media, and see multiple retellings of the lives of English kings as well as Arthurian and Nordic myth. But other cultures are pretty thin on the ground. Believe me, I love me a bit of Henry Tudor and Merlin and Game of Thrones/Wars of the Roses, but variety is the spice.

We need people passionate about telling different kinds of stories. We need to hear voices full of love for other histories, cultures, lands. The love is key. One can criticize, sometimes harshly, but the criticism is balanced out by a deep desire for something higher or better – and the conviction that the people in the story are capable of it. A storyteller is most scathing about those he loves. Storytelling is a moral exercise – not because we are sitting in judgment over some fictitious person, but because we are learning to empathize. The story allows us to say, “he struggled, he was human, he failed, he was just like us”.

*END OF PART ONE*

This entry was posted in fun stuff, news, things I thunk. Bookmark the permalink.

2 Responses to Conversation with Roger Kupelian: Part One